Comments about ILLUSION by the artists of ILLUSION 2003-2008

Gracias, Thanks to all more than 250 artists participating in ILLUSION show during the years 2003-2008 at the Mission Cultural Center for Latino Arts in 6 opportunities and 2 times at the de Young Museum and one time at SOMArts.
Was an amazing experience, sharing the art, the momentum, the projects and ideas around us, the creative process of individuals and groups.
It was an honor to work with all of you my dear artists, now is time for a break, but you never know, ILLUSION could be coming soon, abrazos de paz y poesía
Adrian Arias
Illusion show creator and curator
@ the Mission Cultural Center in 2002

"As an emerging artist, Illusion has given me an invaluable supportive environment to grow as an artist, and to experiment with ways to interactively involve the public. The energy of each Illusion has been an explosion of creativity and community charged with life that I will always remember. I love seeing so many people from various ages and walks of life being comfortable together, creating, enjoying, and being in a positive space together. Illusion, with its white walls that come to life with our intentions and interactions, is a beautiful metaphor for each day and moment that we live." 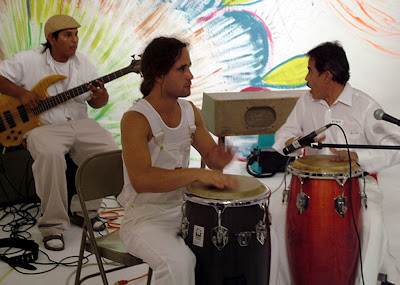 “Illusion for me is a creative
inspiration that helps me get in
touch with myself at the same time
that it connects me to a community. There is power in filling a white space
with artfulness; this power reminds
me that the communities in which we live could be —and indeed ARE—
that white space. It's up to us to fill the spaces with creativity,
not destruction, with ineffable inspiration, not with more material "things" 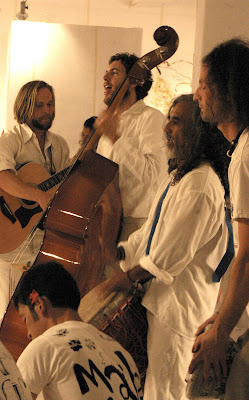 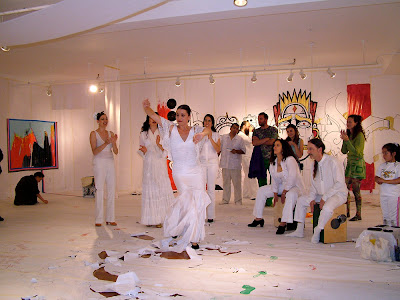 “Illusion is the illusion for a moment that art is life and life is art. It is a glimpse of the inner workings of the artist in all of us.
Without the audience there is no show, and art falls lifeless against silent walls. Illusion is a crazy carnival celebrating the interaction of all forms of art with its audience.” 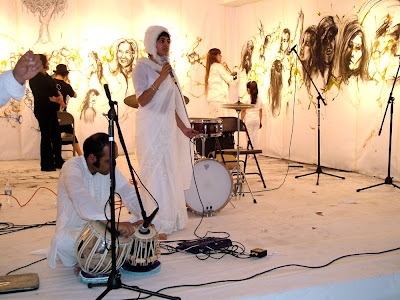 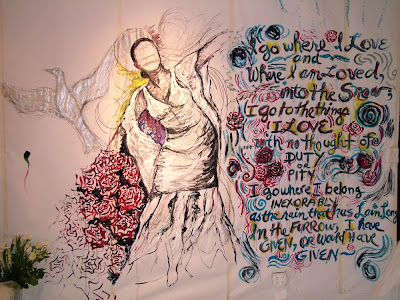 "ILLUSION, transformation: a gallery is just gallery.
A gallery dressed in white paper and white covered artists is an illusion.
It's an unlimited canvas on which creativity is set loose... you see it play, you see it dance, and sing and interact, crash, grow, transform the whole place and you. The most amazing thing about
this illusion is that it's real.” 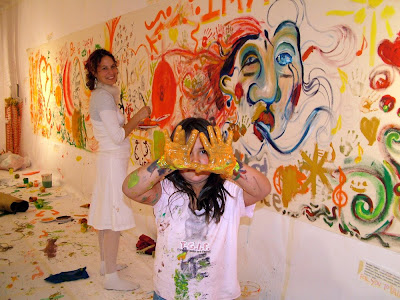 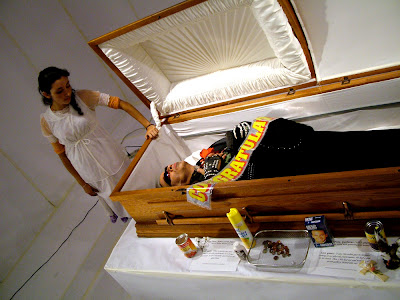 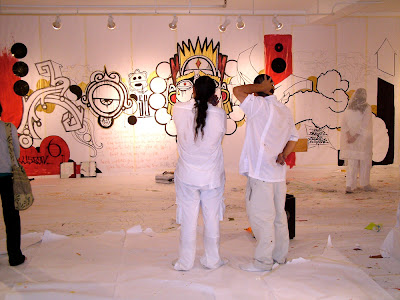 “I really enjoyed participating in Illusion.
It was interactive and full of surprises. People joined me in my knitting and were thrilled to get to sit and be part of it. It was fun to blur the distinction between
artist and observer.” 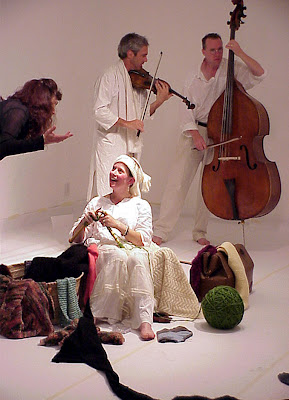 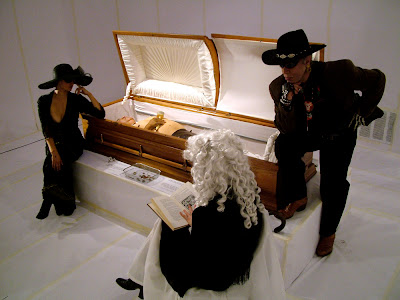 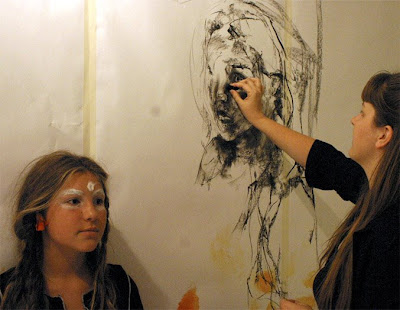 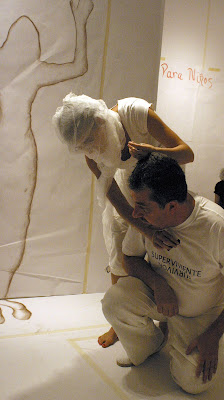 “First, were those anxieties. Is my white outfit white enough? Does my white hair count as white? What can I contribute as a participating artist? Is that good enough? Will it be any good at all?

I arrive at the Centro-a commotion of ladders, tape, scissors, and rolls of white paper, when, suddenly the work stops and the room looks as quiet as falling snow. The entire space white: melting and losing its boundaries with white floors and walls.

The public is arriving! The fifty artists huddle in the communal dressing room absorbing last minute instructions. We re-enter the blinding whiteness, illumination, and promise of change through unimagined interaction. Jorge Molina with his magic chants, feathers, and smoke infuses us with ceremonial focus.

People enter in barefoot silence, dressed in startling black against the whiteness. Everything comes as a surprise. I paste poems, hang poems, write poems, urge and coax poems out of other people. We post the poem on the white wall. Sometimes we stop, entrapped in a song, twirling in a dance, painting or gazing in amazement at the transformation of images, space, and energy. The black and white hours dizzily passing, until I see only traces of white. Most people are gone. We roll and recycle the paper. The room becomes the familiar gallery again. Was it only a dream, a memory, or an illusion?” 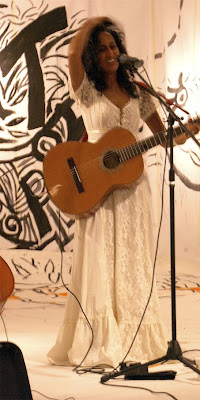 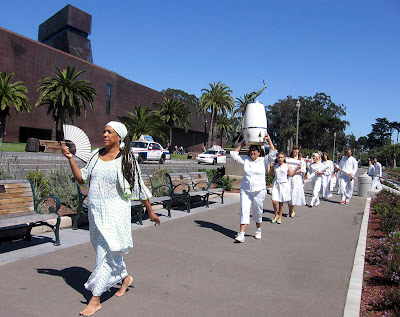 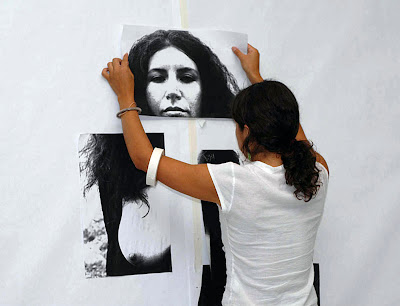 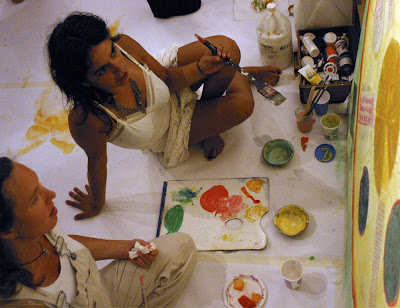 And here a link with amazing photos by CARLOS CORDOVA, gracias Carlos!
http://www.flickr.com/photos/carlostexca/2895711754/in/photostream/
Posted by ILLUSION SHOW at 7:37 AM 9 comments:

...the artists at the begining of Illusion 7 DREAMS....(photo by Sebastian Davila)

...artists sharing the initial energy to start the dream...

...La Tania in front of the slide show made possible thanks to Fidel Dolorier and the collective art-installation LA PARED DE LOS ZAPATOS...THE WALL OF SHOES, made by the audience...

Iris Clearwater with the fishing dream project, with a great interaction with the audience...

...and in the INTI RAYMI Gallery...Circo Gitano organized by La Tania with 13 musicians and dancers and 3 painters...Mara Brown, Todd Brown, Tania Padilla...

...musicians, dancers and audience getting ready....

...and in the main Gallery ... Sebastiana Pastor with her community project Dreams Seeds, made with dreams from her students...here you can see how is growing the creative process...

...the slide show of Fidel dolorier and some very special performances in the main gallery...

...A group of teenagers building houses inside shoe boxes...

...HANDS...a very important instrument for the night of DREAMS...

...the new generation working hard in the walls... 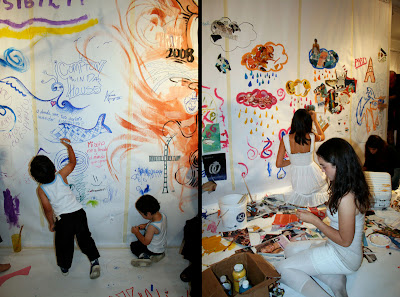 ...and in the main gallery the paper is living... with Tania Figueroa in collage and dancing with Nadja Haas 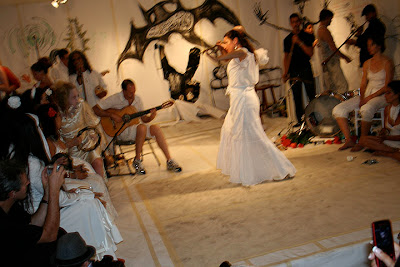